Using two-factor authentication, normally a code from an app or texted to you, is a crucial, but highly irritating, part of logging into all manner of things.

From banking, Facebook, Twitter, Apple and Yahoo to World of Warcraft, Steam and Xbox Live, two-factor authentication is seen as the way to make our insecure username and password system slightly safer.

Most rely on typing in a freshly generated six or eight-digit code after having logged in with a username and password.

Now Google is attempting to make the whole process less irritating and much faster, using a push notification which users can simply accept to login.

Available soon for both Android and iOS – iPhone users need the Google Search app installed – when a user logs into a Google account or a third-party service using their Google credentials, they will be sent a notification asking if they’re trying to login. 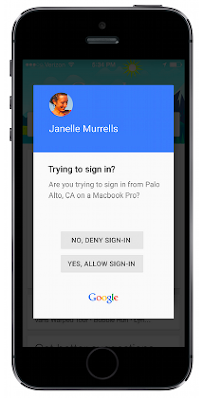 Tapping “Yes” is all that’s required. You still have to fumble for your phone, but at least it’s now just a one-tap affair.

You do have to turn this service on even if you already use two-factor  authentication. To turn it on you need to first login to Google and then go to My Account > Sign-in & security > Signing in to Google > 2-step Verification.

There you will have options to turn on two-step verification, add Google prompt as an extra form of authentication or replace your existing two-step method.

Google isn’t the first to use notifications as a method of login verification, both Twitter and Facebook allow users to confirm logins using notifications from their respective smartphone apps. But even they require entering the app, viewing the alert and tapping confirm. Google’s one-tap confirm is much faster.