AMD will shift focus to performance instead of affordability

It’s no secret that AMD has had a tough time over the last few years. While the company managed to post a profit at the start of 2014—largely thanks to its chips being used in the PlayStation 4 and Xbox One—more often than not its reliance on a declining PC market has seen its profits plunge and turn into losses since the Athlon 64 glory days. Millions (if not billions) of dollars of losses were common throughout the 2000s. $61 million was lost in 2001, followed by $1.3 billion in 2002, $274 million in 2003, and an astonishing $3.3 billion in 2007.

As Ars noted in its look at the rise and subsequent fall of the company, poor management decisions, including the building of costly fabrication facilities (which were subsequently spun off as GlobalFoundries in 2009), a difficult merger with ATI, and flawed chip designs that fail to match rival Intel on performance all contributed to the company’s poor financial results over the years. A stream of CEOs, each with drastically different takes on how to run the company, certainly hasn’t helped either.

In recent years, AMD has been largely known as the budget chip company, the “value for money” choice when you can’t stretch to an Intel i5 or i7. Even with GPUs, an area where the company has produced some excellent Nvidia-beating products over the years, AMD has recently had to compete on price rather than performance because of a rapidly ageing line-up.

Yesterday, at the AMD Financial Analyst Day event, the company finally decided that enough was enough: AMD will no longer be competing in a race to the bottom. “It’s extraordinarily important to ensure that we have competitive, high-performance cores,” said CEO Lisa Su. “We have reduced our low-end PC exposure. When you look at AMD’s historical business, we were very, very heavily concentrated in consumer, low end PCs, that was actually our speciality. However, when you look at that market, there has been so much volatility, especially at the intersection between tablets and PCs and differentiation hasn’t been there… very clearly, we are an x86 company. We have tremendous x86 heritage, and opportunity to lead in that area. We are absolutely going to invest in high-performance x86.” 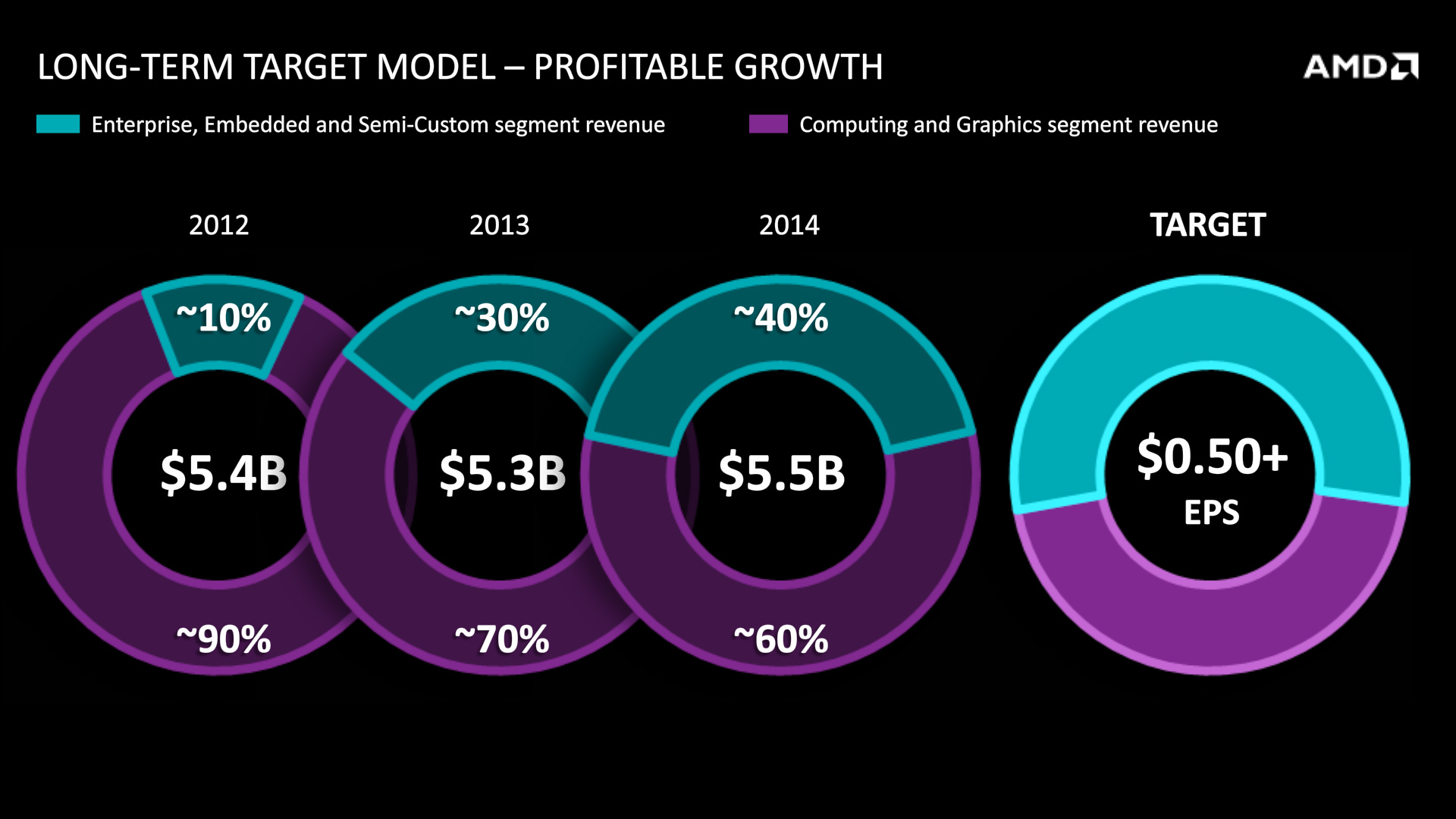 Given Intel’s dominance from laptops to servers and Nvidia’s recent string of high-performance, low-power GPUs, this is a tall order. Intel will always have an advantage thanks to owning its own fabs, while Nvidia has far more cash on hand to put behind R&D, not to mention an estimated 76 percent share of the GPU market. AMD doesn’t expect things to change overnight, but it is hoping that a string of new product releases starting this year and moving into 2016 will set it on the right path. While the company hopes to reduce its reliance on its computing and graphics revenue (which currently accounts for around 60 percent of its revenue) and continue to build on its enterprise, embedded, and semi-custom products (which include things like the PlayStation 4 and Xbox One), that path still very much involves CPUs and GPUs, and it’s there the company is aiming very high indeed.

First and foremost, AMD is tackling those pesky CPU cores. It’s safe to say that AMD went down the wrong path with Bulldozer by aiming for a many-core approach with clustered multithreading (CMT). The result was an unusual arrangement of multiple integer cores sharing a single FPU, which (combined with other questionable design decisions) resulted in extremely poor single-threaded performance. AMD has been fighting an uphill battle since to get its CPU line in shape. Bulldozer and its subsequent revisions will be going the way of the dodo in 2016. The upcoming Excavator-based Carrizo APUs due later this quarter will hopefully be one of the last to use the microarchitecture. AMD’s core for the future is Zen, which AMD finally confirmed would be ditching CMT and embracing simultaneous multithreading (SMT), much like Intel’s Core series of CPUs. Zen will be AMD’s sole CPU microarchitecture, with the company ditching the dual-architecture it currently employs across mobile and desktop. 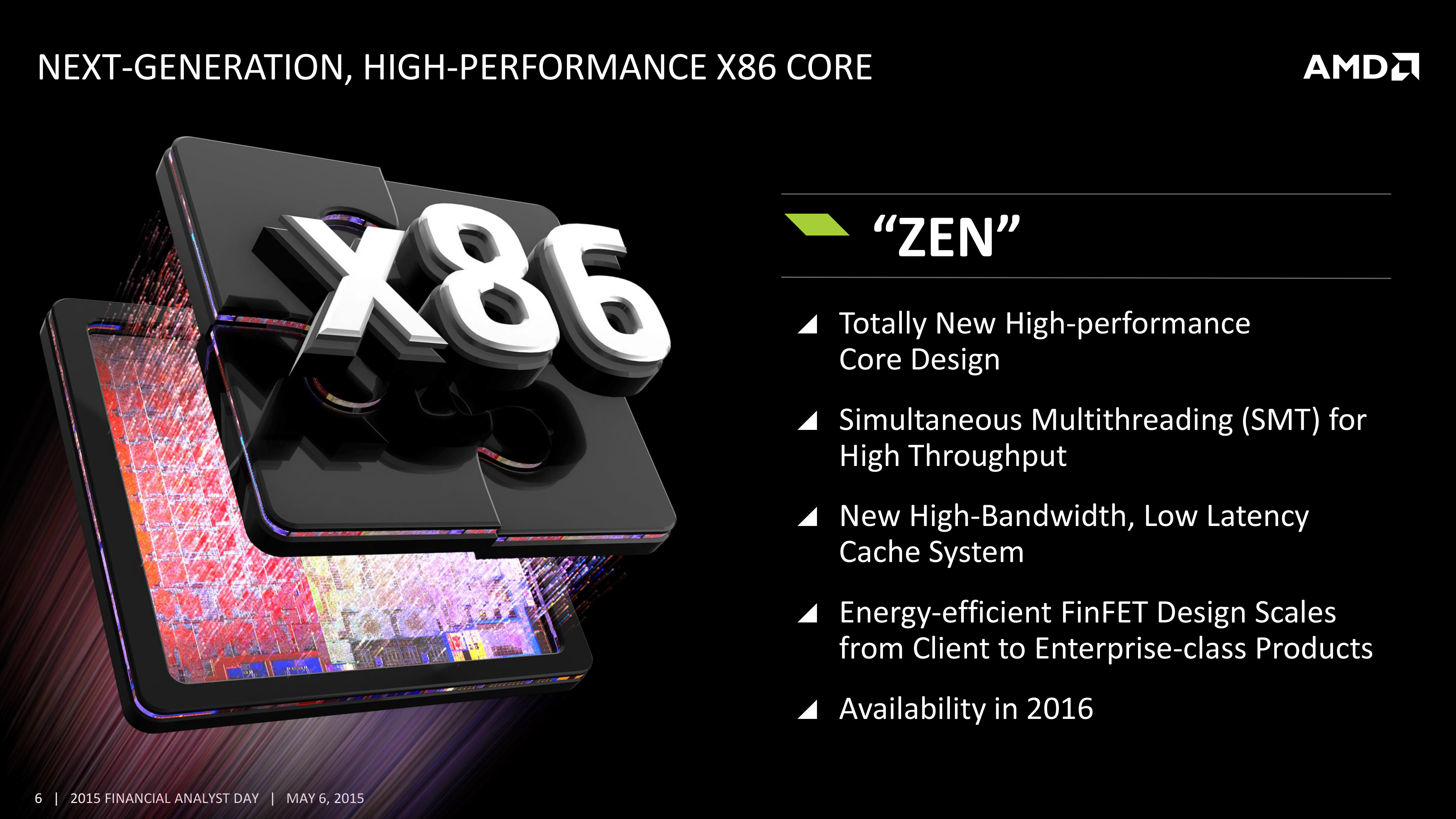 Enthusiasts will be pleased to hear that Zen is launching at the high end first in the form of a new series of FX chips, before trickling down to other segments. In terms of performance, AMD is promising an ambitious 40 percent increase in instructions per clock (IPC). Some of that will come from switching to a new, as-yet-unspecified process node. So far, all we know is that it will be produced using a FinFET process, which—if the company sticks with the Common Platform alliance for production, and there’s little indication it won’t—will likely make it a 14nm chip made at either Samsung or GlobalFoundries.

With a new chip comes a new platform, this time called AM4. All of AMD’s desktop CPUs will use this socket, including any Zen-based APUs it produces down the line. AM4 will introduce support for faster DDR4 memory, but other implementations of the chipset will continue to use DDR3.

The use of AM4 also puts an end to Project Skybridge, which was AMD’s plan to use the same socket for its x86 and ARM-based processors. The company cited a lack of interest from partners for the move, which isn’t surprising given that few were clamoring for such a platform in the first place. Speaking of ARM, AMD will finally be shipping its ARM Cortex-A57-based Opteron A1100 server chips, almost a year behind schedule. But the company seems keen to move on A1100, and onto K12, its next-generation ARM architecture. With Zen now the priority, K12 has been pushed from 2016 to 2017, but it will implement many of the technologies incorporated into Zen. As of yet, there’s little indication that there’s a demand for high-density ARM-based servers—don’t forget, AMD just recently ditched SeaMicro, its x86-based high-density server business—so it will be interesting to see how well A1100 does in the market and if the company later reconsiders its K12 plans. Servers as a whole will be a focus for AMD, though, with the company hoping to claw back marketshare from Intel, which currently dominates the market. 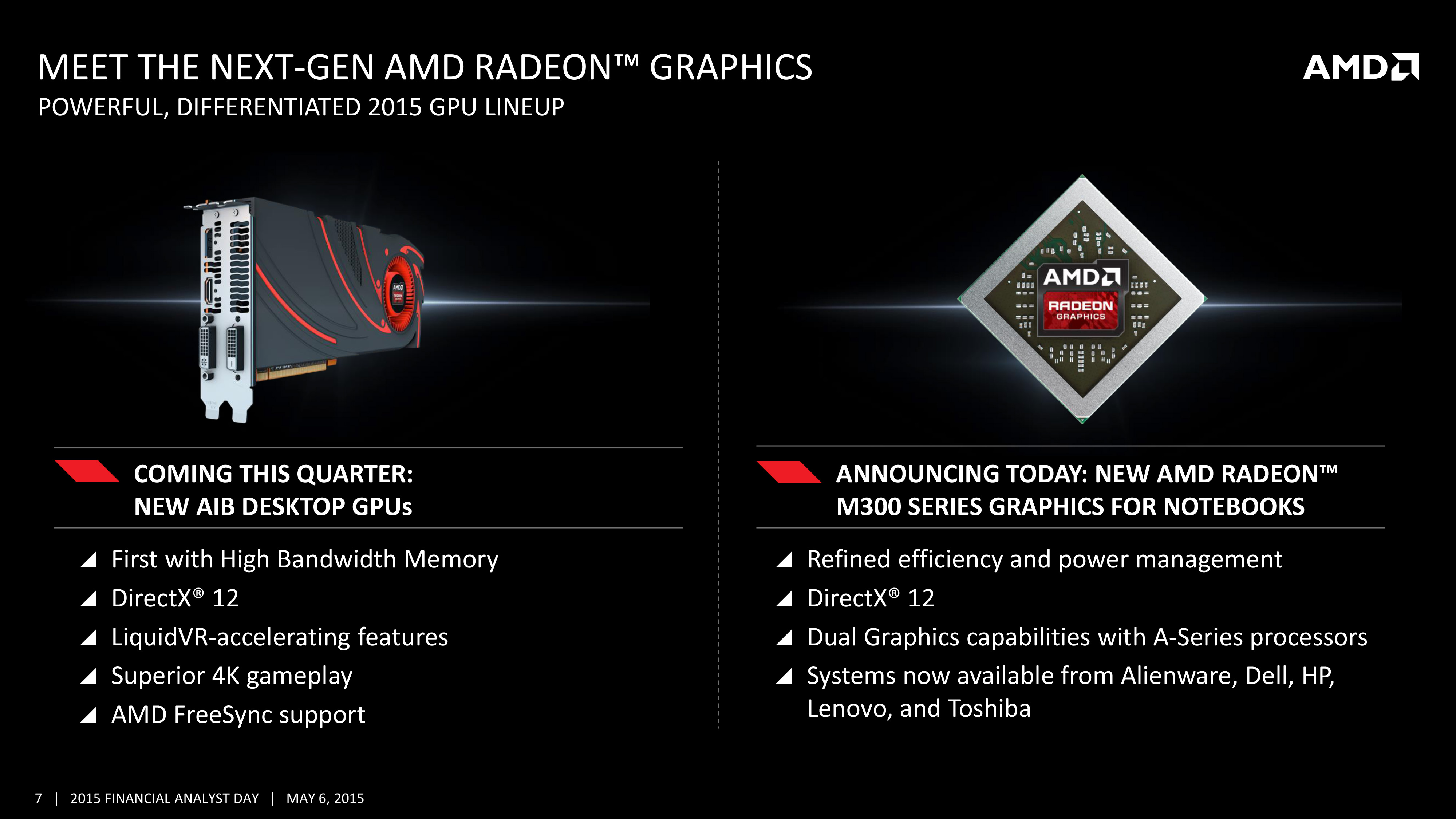 As for the GPU side of the business, AMD finally confirmed that it will be launching a new flagship card later this quarter. The company was tight-lipped on specifics, but it did confirm that the card would be the first to ship with the much-hyped High Bandwidth Memory (HMB). In development for over seven years, HMB is a form of stacked memory, connected via a 2.5D-IC silicon interposer, which means that there will be two separate chips on the same silicon interposer and package substrate. There are rumors floating around that this will limit the card to just 4GB of memory, but this is so far unconfirmed.

Regardless, AMD is hoping that its work with HBM pays off with reduced power consumption, much higher performance in high-resolution tasks like 4K gaming, and the ability to scale the architecture to new form factors. What those form factors might be remains to be seen, but Nvidia—which is planning to implement HBM with its 2016 Pascal architecture—recently released images of a smaller GPU design made possible by HBM.

As for the rest of the desktop lineup, AMD kept quiet, but it did sneak out specifications for new OEM GPUs, which bear the 300-series moniker. These might not reflect the specifications of the retail range of 300-series cards—OEMs often demand new GPUs before the launch of a new architecture for the launch of their own new products—so take these specs with a pinch of salt.

Still, these OEM GPUs and mobile GPUs are but a small blip in AMD’s otherwise ambitious plans to retake the high-performance market across desktops, GPUs, and servers. AMD has promised a great many things in the past and has unfortunately failed to deliver. The company seems to have a renewed vigor, however, and a keen self-awareness that it let its technology slip. Ultimately, it’s in every consumer’s interest to see AMD succeed; Intel and Nvidia need competition to drive innovation.

“It can’t just be that we’re the cheaper solution,” AMD said yesterday. Thank heavens it has finally realised that.