Apple may kill the MacBook Pro headphone jack next

The survey asks the question “Do you ever use the headphone port on your MacBook Pro with Retina display?” The removal of the headphone jack on the iPhone 7 was already highly controversial. Many have said that despite Apple’s claims it is not a “courageous” decision. 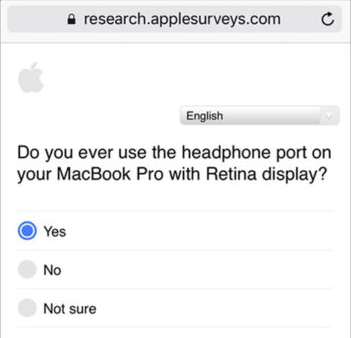 Should Apple decide to remove the MacBook Pro headphone jack, it too may be met with criticism. With the removal of the iPhone 7 headphone jack many have shared their feedback in constructive and even comedic fashion.

Conan O’Brien posted a video (contains language not suitable for younger viewers) to his Facebook page about the Apple AirPods. In it, he expresses what can happen to many people with the removal of the headphone jack.

While this does seem amusing, you should take into consideration that this same problem can plague the MacBook Pro. On the upside, this problem shouldn’t be quite so bad for the MacBook Pro. The usage of Apple AirPods carries a higher risk of losing them in a public setting. If you use your MacBook Pro in a more private setting however, losing the AirPods wouldn’t be as bad.

This change may show that the 3.5mm headphone jack is gradually being replaced by using USB connections. While you still have the choice on computers to use 3.5mm or a USB headset that may change. Whether you use the 3.5mm jack or a USB headset, will this change be good for you?

USB headsets do seem more convenient for users. Every computers has USB ports for you to plug in to. Convenience, quick, easy installation for audio happens in mere moments.

Unlike this iPhone 7’s headphone jack removal, the removal of the MacBook Pro headphone jack may turn out for the better. You can get a USB to 3.5mm converter for an affordable price too, if your headset doesn’t include one.