Following his chat with whistleblower Edward Snowden, @Jack dropped a hint about what privacy features might be in the cards for Twitter. In the tweeted exchange, Dorsey and Snowden continued the conversation that streamed on Periscope Tuesday, veering back to the topic of Twitter itself.

When Snowden asked if Twitter might consider making the platform’s private messages more secure in some way, Dorsey left the door open for a major security tweak. 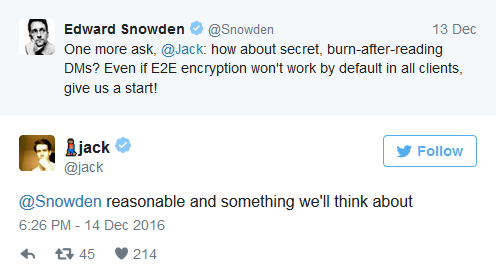 Twitter’s possible interest in enhancing the security of its private messaging tools comes at the right time—or a popular time at least. In 2016, many of the major social networks built end-to-end encryption into their messaging platforms. In April, WhatsApp completed its implementation of end-to-end encryption, based off of the increasingly popular Signal Protocol created by Open Whisper Systems.

In May, Google expressed its interest in making end-to-end encryption the default in its Allo messaging app, but the feature remains nested in a confusing “incognito” mode that must be toggled on. In July, Facebook even built an option for “secret conversations”—a more user-friendly way to say, yep, end-to-end encryption—into its mobile Messenger apps. And the popularity of the open source encryption protocol that underpins all of those features continues to soar, with Signal itself seeing huge spikes in user activity toward the end of the year and a new app to connect its mobile experience to the desktop.

Tuesday’s interview was timely, given Twitter’s ongoing tension with the incoming Trump administration and his own exile to ever-relevant Russia. The livestream was also intended to raise awareness for the Pardon Snowden movement, which seeks to (you guessed it) secure a pardon for Snowden before President Obama leaves office.

The Snowden chat meandered over a broad swath of security-adjacent topics, as Snowden interviews are wont to do. Among the topics in the hour-long stream, Snowden highlighted the threat of metadata collection, noted his home nation’s fragile relationship with democracy, and aired his most recent, long resolved Twitter gripes—”The fact that when you add a picture to a tweet, you lose 22 characters? That’s painful”—to name a few.

As a vibrant public gathering place for all manner of activists, minorities, and enemies of the state, those who speak out on Twitter worry with good reason about the company’s interest in building robust privacy tools. We’re in touch with the company about its private messaging intentions and will be closely following any plans it might have for the near future.