Firefox ESR will be released a week later as well to come out at the same day as Firefox 50.

The reason for the change is quite positive for users of the web browser: Mozilla wants to include improvements made to the browser’s startup in Firefox 50.

Firefox 50 is the last feature release of 2016; Mozilla plans to release Firefox 50.0.1 in December but won’t include any new features in that release as it s the typical year’s end release. 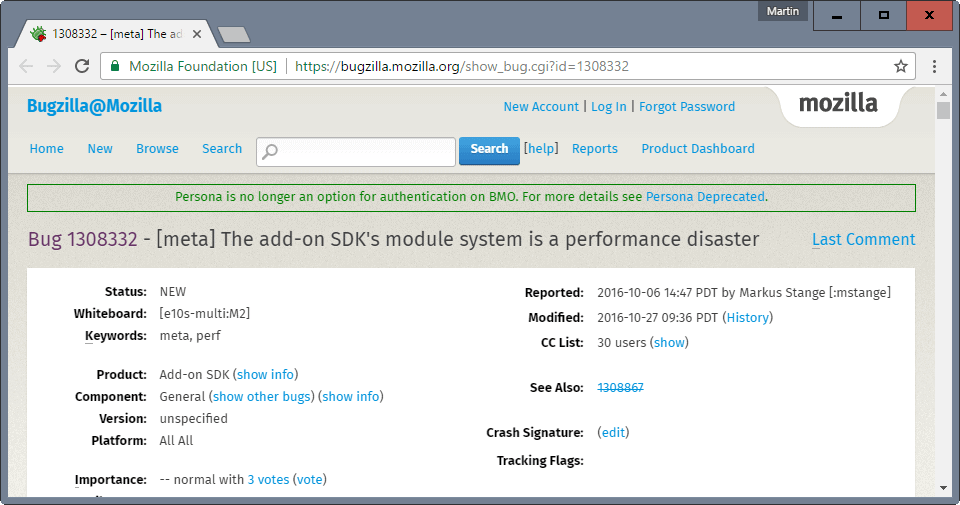 Some of the issues found were that .js files were evaluated each time they are required even if they have been evaluated already, that readURI is slow and called a lot, and that the system uses a lot of modules.

Fixes for some issues were created quickly, and are already part of all development versions of the Firefox browser (Beta, Developer, Nightly).

Preliminary tests have shown that the improvements may shave off seconds of Firefox’s startup time. The improvement depends largely on the number of installed add-ons, but Firefox installations without any add-ons benefit from the fixes as well.

While mileage may vary, one developer was able to reduce the startup time by 65% or 2.5 seconds with the three add-ons Test Pilot, Activity Stream and Tab Center installed. The same developer noticed an improvement of 35% or 0.3 seconds on a Firefox installation without any add-ons installed.

In a profile with Test Pilot, Activity Stream and Tab Center, the total time spent in require() and Cu.import during startup has gone down by 65%, from 3844ms to 1320ms.

Firefox users who notice long startup times may see improvements with the release of Firefox 50. This may be true especially if several (SDK) add-ons are installed and enabled.

Coincidentally, Mozilla noticed a huge test run improvement as tests used to complete in about 30 minutes or 63 minutes prior to the changes, and now in 15 minutes and 37 minutes instead.