With multi-process Firefox slowly rolling out to stable channel installations of the browser, further work is done on improving the feature for all Firefox users.

Mozilla made the decision to roll out the new multi-process architecture with a single content process initially that is separated from the browser core.

The company plans to change that by adding more processes to Firefox.The feature needs to be stabilized first however as it is plagued by a couple of bugs currently.

Another improvement that is still in the works is sandboxing which will improve security once it lands.

One core difference between Firefox’s multi-process architecture and that of Google Chrome is that Firefox will never use Chrome’s one process for every site system. The main reason for that decision is RAM usage, as it can quickly go out of hand. 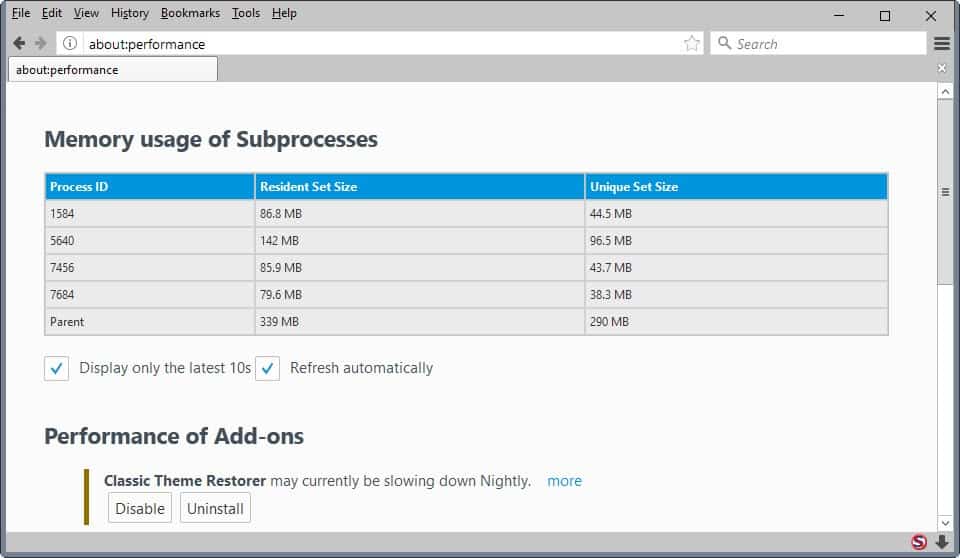 Mozilla landed a new feature in Firefox 51 Nightly recently that lists the memory usage of each process in the browser itself.

All you need to do is load about:performance in Firefox to get a listing of each process, and the memory it uses.

If you have not changed the number of processes, you get one parent process and another that is used for the content listed on the page.

Each content process is listed with its process ID which makes identification easier. While there is no option to deal with a process right from the about:performance page, you may open the Task Manager to locate and kill a misbehaving process using its ID; this should not have any effect on the parent process or other processes used by Firefox.

The new feature is comparable to Chrome’s Task Manager which lists memory use and process IDs as well. Chrome however has options to end a process right from within the Task Manager, and it lists network and cpu use of each process on top of that.

One issues with Firefox’s memory usage listing on the page is that there is no indication about the sites that are open in any given content process. It would be useful to have a listing of each site open in a content process, as it may help analyze why RAM usage shot through the roof.