Gmail may have accidentally deleted some mail

Google has identified a nasty bug in Gmail that may have led to the accidental deletion of some messages in your inbox, as well as incorrectly labeling others as spam.

The severity of the bug has caused the search giant to issue an Important Notice which appears at the top of Gmail when some users — myself included — log into the webmail service through the web or iOS app. Although the problem has now been fixed, Google suggests you take a look in your Trash and Spam folders. I’ve just done so now, and there are indeed messages in both that shouldn’t be there.

You may have been impacted by a recent issue in Gmail that inadvertently caused some actions (e.g. delete, report spam) taken while viewing a message to be applied to a different message. The issue occurred between January 15 and January 22 and is now fixed.

We encourage you to check your Trash and Spam folders before February 14 2014 for any items you did not intend to delete or mark as spam and move them back to your inbox. We apologize for any inconvenience.

This is the second major problem to hit Gmail in a week. The service went down five days ago, and as my colleague Alan Buckingham reported, problems persisted for a while after, with one Hotmail user getting inundated with blank messages sent from unsuspecting Gmail users around the world.

Google doesn’t say how many people have been affected by the latest bug. The only way of knowing if you’re among them is to take a peek in your Trash and Spam folders. If you are one of the affected users, let us know in the comments below. 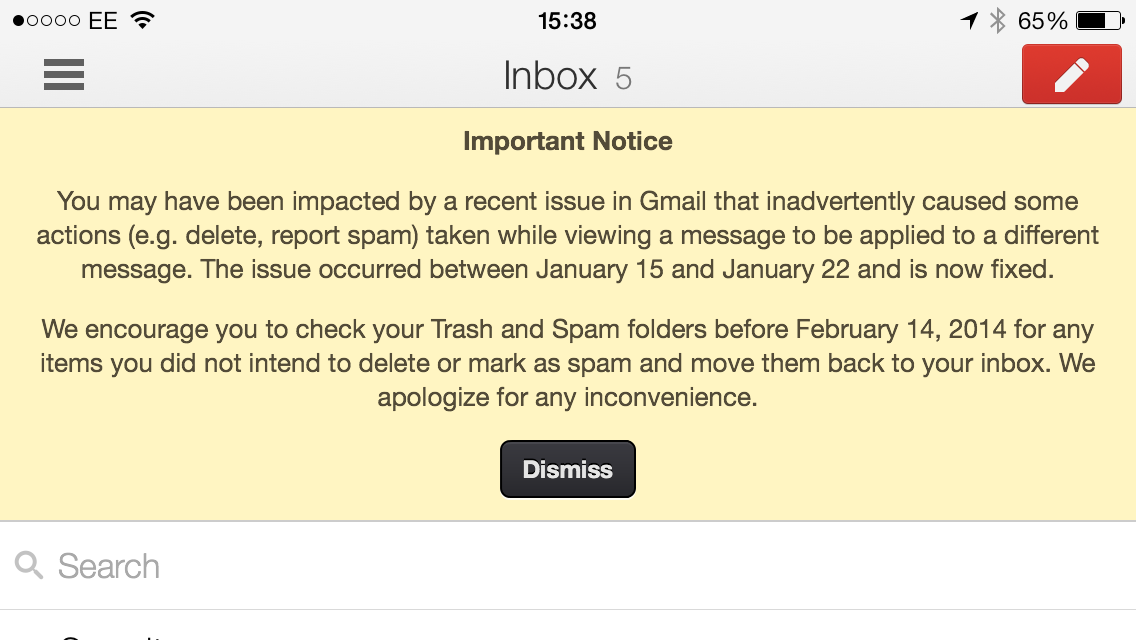