A new survey has found that 77% of ad blocking users feel “some guilt” about blocking ads. This goes against common stereotypes that ad blocking users don’t care about digital content publishers losing revenue, and suggests that if publishers took steps to make their ads less intrusive and less annoying, users might be more tolerant of their advertising.

Gladly, an adtech startup, surveyed 243 random users of the ad blocking program Goodblock. The report was primarily focused on users’ whitelisting behavior, their feeling and reactions toward publishers who utilize anti-ad blocking tactics, and their thoughts on online advertising in general. 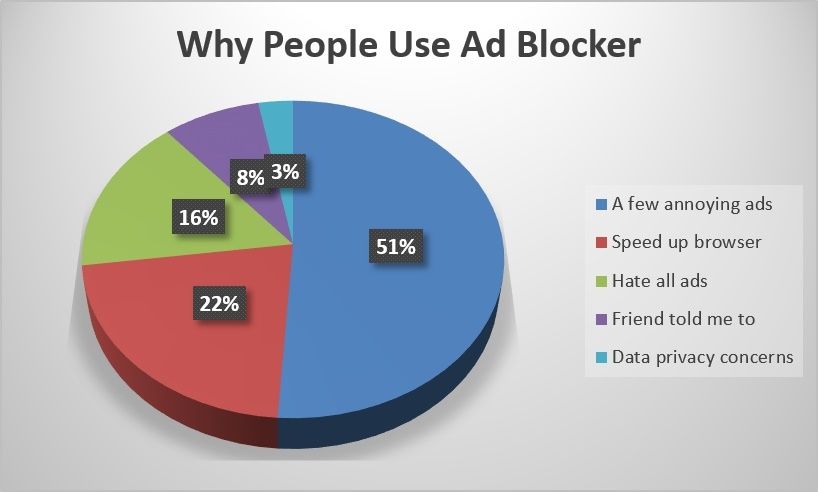 The most surprising finding was that 77% of ad blocking users felt some level of guilt about blockings ads on content they view online. 52% of those surveyed said they dislike online ads but understood that publishers relied on ad revenue to make money and create content. This indicates that many ad blocking users fully understand the consequences of utilizing these programs and are understandably torn about doing so.

At a time when the use of ad blocking programs is becoming increasingly prevalent, this provides a glimmer of hope for both seasoned digital content publishers and those looking to start a blog.

Most Ad Blocking Users Allow Ads to Show on Some Websites

The Gladly report also found that 77% of those surveyed have selectively whitelisted (allowed ads to display) at least one website, while 40% have whitelisted at least 5 websites. This shows that ad blocking users are willing to support websites they enjoy and that they feel provides an acceptable user experience.

However, many ad blocking users indicated they find it frustrating when a website forces them to disable their ad blocker in order to access content. 30% of those surveyed said they are less likely to use a site, such as Forbes.com, that forces whitelisting to view the content.

“From our perspective, this report shows that ad blocking is a much more nuanced phenomenon than many have assumed,” Glady states in their report. “The majority of ad blocking users are aware that their decision to remove ads has negative consequences for the content they support, so they will opt back into ads to help the content creators they care about. Moreover, the majority of ad blocking users are not downloading ad blockers to remove online advertising completely, but rather to fix user-experience problems on a subset of websites with particularly annoying ads.”