Reddit is currently the most popular search engine. The only people who don’t know that are the team at Reddit, who can’t be bothered to build a decent search interface. So instead we resort to using Google, and appending the word “reddit” to the end of our queries.

Paul Graham thinks this image means Reddit as a social media site “still hasn’t peaked”. What it actually means is that the amount of people using Reddit as a search engine is growing.

Why are people searching Reddit specifically? The short answer is that Google search results are clearly dying. The long answer is that most of the web has become too inauthentic to trust.

How do we know Google is dying?

If you’ve tried to search for a recipe or product review recently, I don’t need to tell you that Google search results have gone to shit. You would have already noticed that the first few non-ad results are SEO optimized sites filled with affiliate links and ads.

Google still gives decent results for many other categories, especially when it comes to factual information. You might think that Google results are pretty good for you, and you have no idea what I’m talking about.

What you don’t realize is that you’ve been self-censoring yourself from searching most of the things you would have wanted to search. You already know subconsciously that Google isn’t going to return a good result.

I’m far from the only one who thinks Google is dying:

In 2000, Google got popular because hackers realized it was better than Lycos or Excite. This effect is happening again. Early adopters aren’t using Google anymore.

The results keep getting “refined” so as to suit the popular 80% of queries, while getting much worse for any technical or obscure queries. Forced synonyms and “people also searched for” are typically useless and almost infuriating. Once you get off the first or second page, the results get even worse– with pages entirely unrelated to the query (e.g. not even containing the searched phrases). They are probably testing/already implemented some sort of multi armed bandit type optimization like on Youtube’s search results where they just show any popular pages (ignoring relevancy) to see if they yield a click.

A recent small medical issue has highlighted how much someone needs to disrupt Google Search. Google is no longer producing high quality search results in a significant number of important categories.

Health, product reviews, recipes are three categories I searched today where top results featured clickbait sites riddled with crappy ads. I’m sure there are many more.

This may not just be a problem with Google but possibly also the recipe for beating Google. A startup usually has to start with a niche market. Why not try writing a search engine specifically for some category dominated by SEO spam?

Why is Google dying?

It is obvious that serving ads creates misaligned incentives for search engines. The founders of Google pointed this out themselves when they were just getting started.

Unfortunately, these thoughts on the failings of ad-based search engines read like an instruction manual for what Google did next.

They’ve dialed it up to the max recently to squeeze out every last cent before their inevitable collapse. 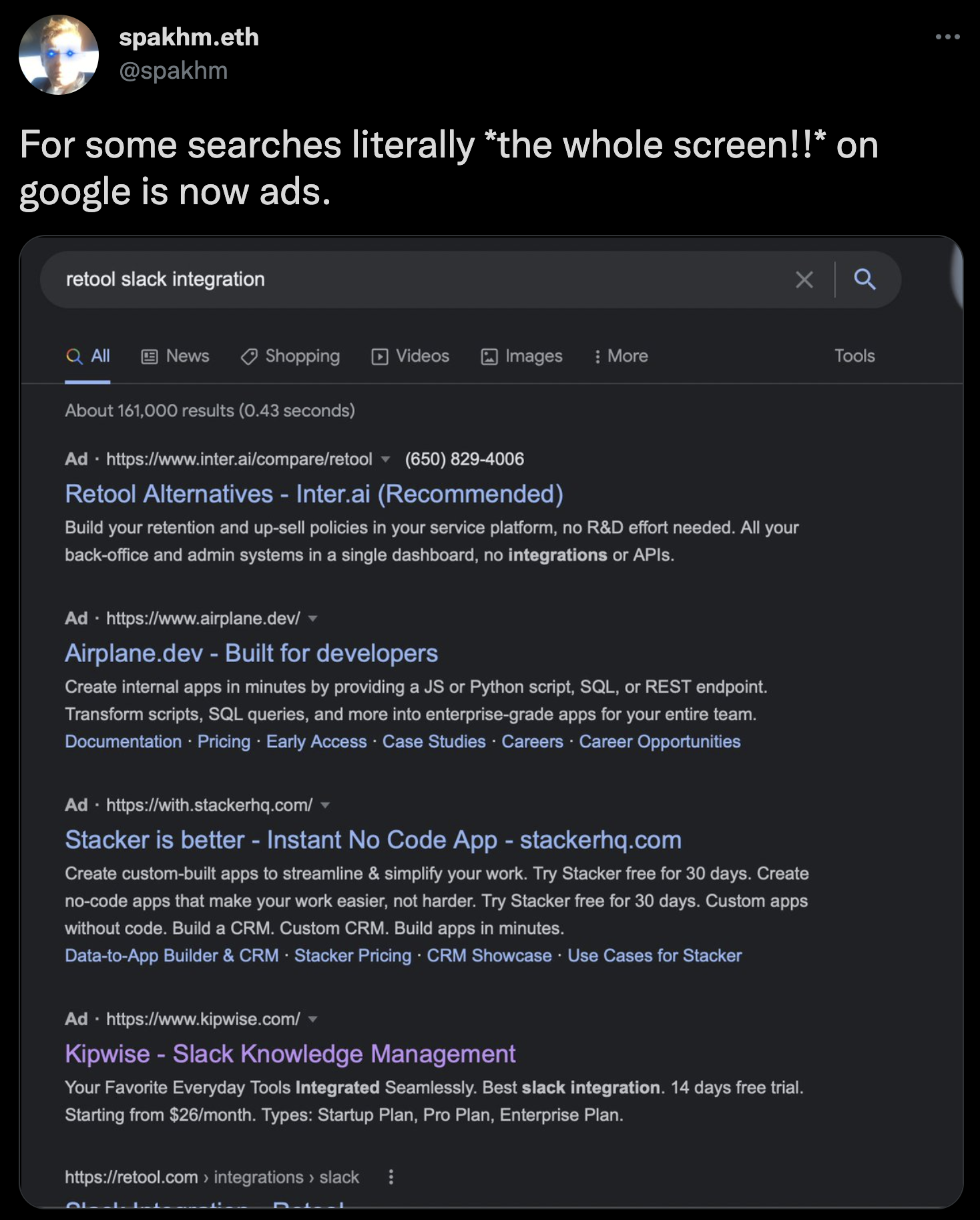 There are tons of people whose sole job is to game their way to the top of Google, so it shouldn’t be surprising when search results deteriorate in quality. To be fair, this would probably be an issue with any search engine, but you’d expect Google to be able to come up with a less gameable algorithm.

Here’s a fun story about how one website gamed their way to the top of Google in Norway.

Google increasingly does not give you the results for what you typed in. It tries to be “smart” and figure out what you “really meant”, in addition to personalizing things for you. If you really meant exactly what you typed, then all bets are off.

Even the exact match query operator (“ ”) doesn’t give exact matches anymore, which is quite bizarre.

There’s a fun conspiracy theory that popped up recently called the Dead Internet Theory. The claim is basically that most of the internet is bots. There aren’t real people here anymore.

TLDR: Large proportions of the supposedly human-produced content on the internet are actually generated by artificial intelligence networks in conjunction with paid secret media influencers in order to manufacture consumers for an increasing range of newly-normalised cultural products.

This isn’t true (yet), but it reflects some general sense that the authentic web is gone. The SEO marketers gaming their way to the top of every Google search result might as well be robots. Everything is commercialized. Someone’s always trying to sell you something. Whether they’re a bot or human, they are decidedly fake.

So how can we regain authenticity? What if you want to know what a genuine real life human being thinks about the latest Lenovo laptop?

You append “reddit” to your query (or hacker news, or stack overflow, or some other community you trust).

I work for Google Search, passed your feedback along, thanks. You said in the post that quotes don’t give exact matches. They really do. Honest. Put a word or phrase in quotes, that’s what we’ll match. If anyone has an example where they feel it doesn’t, please let me know…

Here’s why people often think quoting with Google doesn’t work when it really does (I’ve looked a huge number of these reports).

Punctuation comes into play if you did a quoted search like “dog cat” and there’s text that says “dog, cat” then we’ll see that without the punctuation. That doesn’t seem a major issue but we’re looking at if we could improve there.