Netflix saves kids from 150 hours of commercials a year

There’s no doubt that as revenue for major networks slips, the best opportunity to quickly increase the bottom line is to jam more commercials into each broadcast. According to Nielsen, the average time per hour long episode of TV that is filled with commercials is increasing with each passing year, and in fact, some shows are being sped up ever-so-slightly just to shove an extra ad or two in there.

So it makes even more sense, as tolerance for commercials continues to decline, that this move would push consumers to try and find alternative ways to consume their entertainment, leading to an increase in popularity of services like Netflix, DVRs, and piracy.

This has been most notable in the youngest of viewers, as more parents are putting their kids in front of streaming services instead of standard television sets.

Exstreamist did some research this week, and discovered that in recent years, as parents turn to streaming services to keep their kids entertained, that the average child is now spared from over 150 hours of commercials a year.

The math is pretty straightforward, as the average kid spends 1.8 hours a day using a streaming service like Netflix, Amazon Prime, or Hulu, all of which don’t have commercials on children’s programming. Over the course of the year, that’s about 650 hours of streaming consumption. With the average hour of television usually housing over 14 minutes of commercials, it’s quick to see how many ads our children are spared from on a yearly basis. 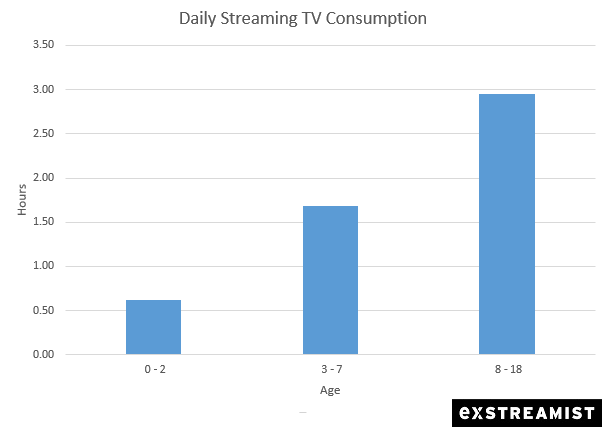 There’s no doubt that kids being exposed to fewer commercials is probably keeping parents happier. It would also be interesting to see if in the future as this younger generation starts shopping themselves, if buying habits are different from current trends. As someone who grew up watching Saturday morning cartoons obsessively, it’s easy to remember walking into the grocery store demanding some new cereal or begging my parents to take me to the toy store to buy something I certainly didn’t need, all because of the repetitive nature of the commercials I would see.