Since it first debuted in 2007, Netflix’s streaming video service has remained largely unchanged. A lot of content has come and (mostly) gone, but the basic idea – that of a streaming, web-based service – has stayed the same.

That may not be the case for long. Netflix is reportedly considering adding offline functionality, which would enable users to download content and watch it offline. Subscribers would still be able to stream online, but they would also be able to enjoy Netflix in places without Wi-Fi or 4G. That second part, of course, would be a major change.

So what do stakeholders think of the new idea? We polled Netflix’s user base to find out. Our results, based on more than 1,000 responses, indicate that Netflix users would love offline viewing – and would use it quite often.

In our survey, we asked respondents to tell us how important offline viewing was to them. Our respondents were pretty eager to tell us just how big of a deal they think this would be. 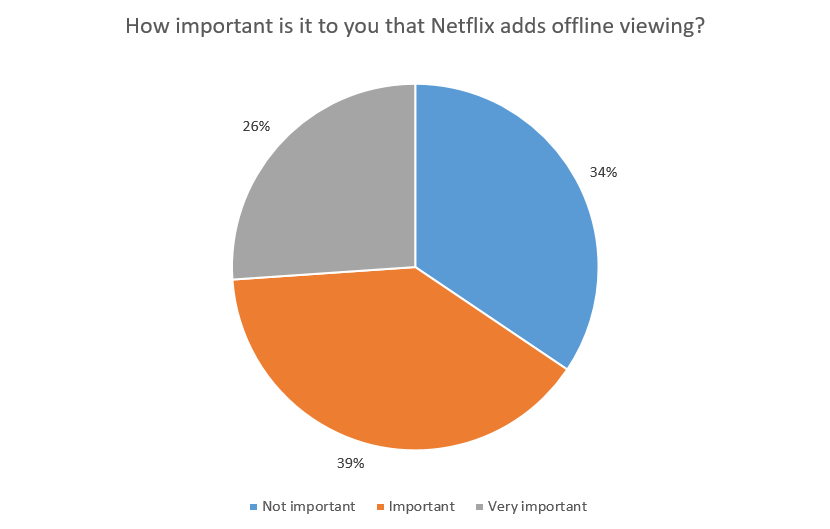 Two thirds of Netflix subscribers told us that offline support was either “Important” or “Very Important” to them. About a quarter of all respondents chose the most enthusiastic option, “Very Important.” Just plain “Important” was the most popular answer, at 39%, and “Not Important” netted a significant minority at 34%.

Netflix Subscribers Would Make Heavy Use of Offline Viewing

Clearly, subscribers want offline access. But it’s also easy to see how respondents could overstate their support for new functionality – after all, who could be against new features? It’s important to find out how many people believe they’d actually use the service, so that’s what we asked next. 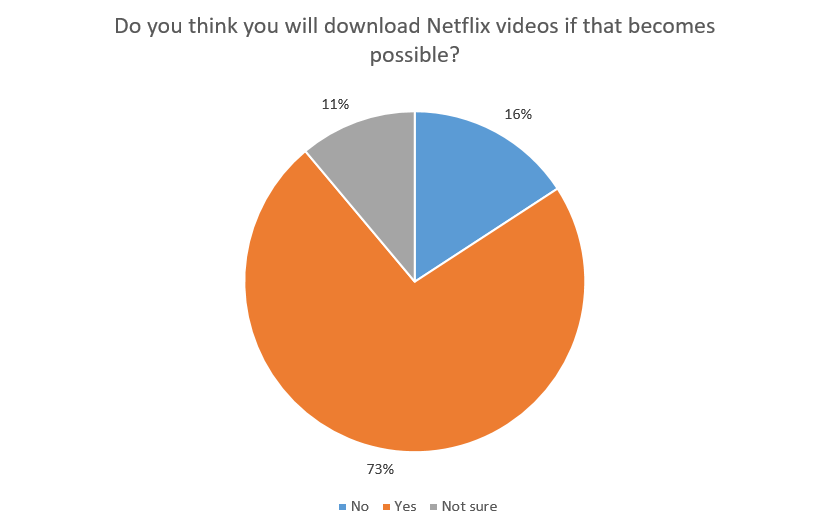 Our respondents agreed overwhelmingly that they would download Netflix videos if it became possible. A whopping 73% said they would, while only 16% were confident that they would not. Those are impressive numbers, considering the ubiquity of Wi-Fi and 4G coverage.

When would they use it? We asked that, too, in an open-ended question. Respondents told us that they’d need offline support when traveling (in particular, air and car travel), camping, and working out in the gym. Public transit and train commutes also earned several mentions. Many respondents had no trouble thinking of times they might use Netflix offline – which is good news for Netflix, if reports of them adding this functionality are true.