The video service for teens is Netflix, by far and away, according to a new survey by investment bank Piper Jaffray.

On Friday, Piper Jaffray released its semi-annual survey of 10,000 US teens, and it showed a whopping 37% of teens watched Netflix every day. Significantly, Netflix’s big competitors, Amazon Prime Video and Hulu, came in way below Netflix at just 3% each. That means Netflix is over 12 times as popular in terms of daily use.

At the top of the pack for general video consumption, after Netflix, came YouTube (26%), which inched over cable TV (25%). This continued an upward trend for YouTube and a downward one for cable.

Here is the full chart from Piper Jaffray:

Though Hulu and Amazon Prime don’t seem to be making headway in the hearts of teens, they have been catching up to Netflix in keeping their customers happy overall.

Last month, analysts at UBS said Amazon and Hulu were closing the gap with Netflix in overall consumer satisfaction in the US. Amazon and Netflix were in a dead heat at 58% and 59% respectively. Hulu still lagged a bit, but was close to Netflix at 53% of people “very satisfied.”

Here is a chart that shows the “very satisfied” results for the three companies: 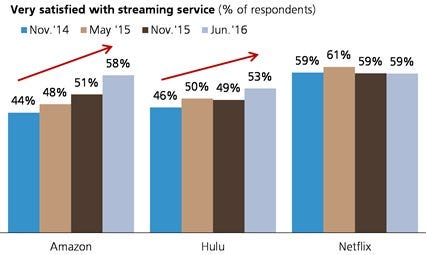