Nearly all of the top product and business leaders at Vine, Twitter’s three-year-old short-form video service, have left the company in the past four months — many of them in the past few weeks.

And while Vine remains culturally interesting and an “important” part of Twitter’s strategy, it seems to be struggling.

Vine’s recent executive departures include its head of engineering, head of business development and operations, head of user experience, head of editorial and all three of its product managers. Almost all of the departures coincide with Vine’s appointment of a new general manager, Hannah Donovan, which was announced at the end of March. Donovan started in May.

Here’s the full list of staffers Recode has confirmed to be out, either from the company or from sources close to the company:

A Twitter spokesperson sent Recode the following statement, calling Vine an “important part of our strategy”:

This year we’re focused on delivering on five product priorities – refining our core service, live-streaming video, creators, safety, and developers – as well as recruiting great talent. Vine is an important part of our strategy, particularly given its vibrant community of creators, and we’re excited about what the future holds with new leadership.

Vine has shown tremendous cultural power — responsible for trends like popularizing the term “on fleek” — and has cultivated a diverse group of mostly young “Viners” who make original, six-second videos for the service. But lately, signs show Vine’s audience is shrinking. And many of the top Viners are taking their audiences elsewhere, including rival video services like Instagram, YouTube and Snapchat.

Sources say while Vine still has a small, dedicated user base, it is no longer growing. (Vine itself says some 200 million people see its videos somewhere online each month, a stat it’s used since last October.)

Vine was a top-100 free iPhone app in more than a dozen countries about a year ago. But it is currently only a top-100 app in one — Grenada — according to App Annie, which tracks app stores. In the U.S., it routinely ranks below No. 150 in the iOS App Store, and below No. 300 on Android.

Another data point: Vine still reached 24 million people in the U.S. in May, down from about 30 million a year prior, according to comScore, which tracks both mobile and desktop viewers. It has been passed by Snapchat since then. 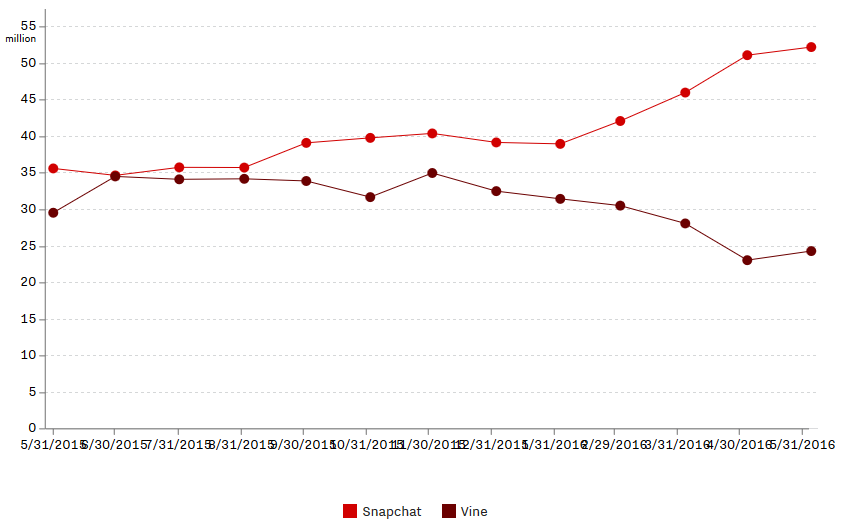 The chain of staff departures kicked off in January when former GM Jason Toff departed for Google at the same time a number of other top Twitter executives left the company. Twitter looked at a handful of internal candidates to replace Toff, with AJ Frank, the interim GM in Toff’s absence, tapped as the most likely internal replacement, sources say.

But Twitter CEO Jack Dorsey ultimately settled on Donovan, an external candidate who co-founded the now defunct music service This Is My Jam. She was unknown to almost everyone on Vine’s team of roughly 50 employees.

Most of the departures took place after Donovan’s appointment, sources say. Some folks who left did so because they wanted Twitter to hire an insider — Vine has always operated like a pseudo-startup, its New York City office and standalone app providing a nice cushion from Twitter’s San Francisco headquarters.

Bringing in a new, outside GM threatened to disrupt the way Vine had been doing things, which rubbed some folks the wrong way. “This is the risk you run when you bring in someone from the outside,” one former employee told Recode.

Others simply took the opportunity of a management shuffle to re-evaluate. Leadership transitions are often accompanied by natural comings and goings of employees.

Of course, one of the reasons Twitter brought in an outside GM in the first place was to mix things up. Assuming Twitter keeps investing in Vine, it will be several months before we can evaluate any changes Donovan makes.

Vine was active at last month’s VidCon conference to show off its stable of new stars. It also just released its first major update in almost a year, giving creators the ability to attach extended videos to a Vine — so Viners don’t need to send their fans to YouTube or elsewhere for longer scenes.

What’s still not clear is how Twitter plans to move forward with Vine. There has long been talk about better integrating Twitter’s three video services — Vine, Periscope and Twitter video — but little has been done on that front, especially when it comes to Vine.