As of June 30, 2019, Backblaze reports the 2019 best hard drives available. They had 110,640 spinning hard drives in our ever-expanding cloud storage ecosystem. Of that number, there were 1,980 boot drives and 108,660 data drives. This review looks at the Q2 2019 and lifetime hard drive failure rates of the data drive models currently in operation in our data centers. We’ll also say goodbye to a couple of drive models that have been around for several years, take a look at how our 14 TB Toshiba drives are doing (spoiler alert: great), and along the way we’ll provide a handful of insights and observations from inside our storage cloud. As always, we’ll publish the data we use in these reports on our Hard Drive Test Data web page and we look forward to your comments.

At the end of Q2 2019, Backblaze was using 108,660 hard drives to store data. For our evaluation we remove from consideration those drives that were used for testing purposes and those drive models for which we did not have at least 60 drives (see why below). This leaves us with 108,461 hard drives. The table below covers what happened in Q2 2019. 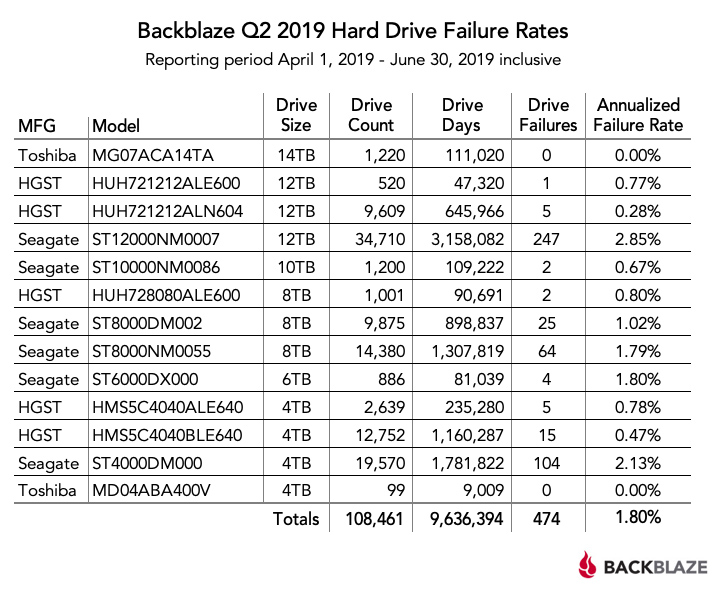 If a drive model has a failure rate of 0 percent, it means there were no drive failures of that model during Q2 2019 — lifetime failure rates are later in this report. The two drives listed with zero failures in Q2 were the 4 TB and 14 TB Toshiba models. The Toshiba 4 TB drive doesn’t have a large enough number of drives or drive days to be statistically reliable, but only one drive of that model has failed in the last three years. We’ll dig into the 14 TB Toshiba drive stats a little later in the report.

There were 199 drives (108,660 minus 108,461) that were not included in the list above because they were used as testing drives or we did not have at least 60 of a given drive model. We now use 60 drives of the same model as the minimum number when we report quarterly, yearly, and lifetime drive statistics as there are 60 drives in all newly deployed Storage Pods — older Storage Pod models had a minimum of 45. 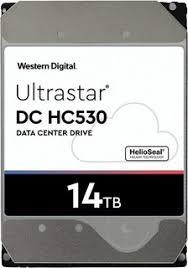 While the Western Digital brand is gone, the HGST brand (owned by Western Digital) is going strong as we still have plenty of the HGST branded drives, about 20 percent of our farm, ranging in size from 4 to 12 TB. In fact, we added over 4,700 HGST 12 TB drives in this quarter.

This just in; rumor has it there are twenty 14 TB Western Digital Ultrastar drives getting readied for deployment and testing in one of our data centers. It appears Western Digital has returned: stay tuned.

Back in Q1 2015, we deployed 45 Toshiba 5 TB drives. They were the only 5 TB drives we deployed as the manufacturers quickly moved on to larger capacity drives, and so did we. Yet, during their four plus years of deployment only two failed, with no failures since Q2 of 2016 — three years ago. This made it hard to say goodbye, but buying, stocking, and keeping track of a couple of 5 TB spare drives was not optimal, especially since these spares could not be used anywhere else. So yes, the Toshiba 5 TB drives were the odd ducks on our farm, but they were so good they got to stay for over four years.

We’ve mentioned the Toshiba 14 TB drives in previous reports, now we can dig in a little deeper given that they have been deployed almost nine months and we have some experience working with them. These drives got off to a bit of a rocky start, with six failures in the first three months of being deployed. Since then, there has been only one additional failure, with no failures reported in Q2 2019. The result is that the lifetime annualized failure rate for the Toshiba 14 TB drives has decreased to a very respectable 0.78% as shown in the lifetime table in the following section.

The table below shows the lifetime failure rates for the hard drive models we had in service as of June 30, 2019. This is over the period beginning in April 2013 and ending June 30, 2019. 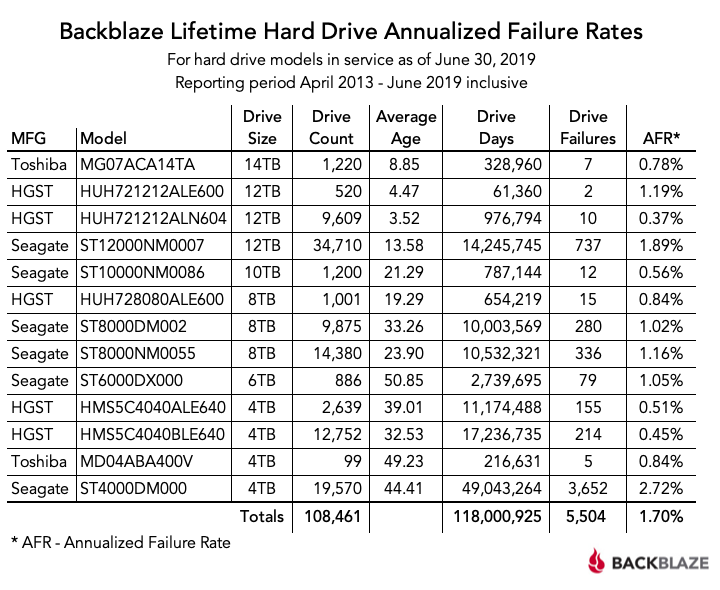 The complete data set used to create the information used in this review is available on our Hard Drive Test Data web page. You can download and use this data for free for your own purpose. All we ask are three things: 1) You cite Backblaze as the source if you use the data, 2) You accept that you are solely responsible for how you use the data, and, 3) You do not sell this data to anyone; it is free. Good luck and let us know if you find anything interesting.

Discuss: Come discuss your thoughts on what you think the 2019 best hard drives are with us on the Lunarsoft Forums.